The following economic awareness entry is based on short-term events and therefore should not be taken as information towards making investment decisions, which are of a long-term nature. It is only meant to provide clarity regarding current economic events, as there is often a large degree of incorrect information dispersed through the media or other sources.

The Week on Wall Street
Stocks moved higher during a holiday-shortened week of trading, capping off a turbulent, but otherwise strong year for equity investors.

The Year in Brief
The global pandemic disrupted economies, financial markets, and daily life in 2020. Households and businesses were put to the test during the toughest and grimmest years in decades. The winter brought a resolution to the U.S.-China tariff dispute, the Brexit referendum, and the first U.S. appearance of the novel coronavirus. As spring started, abrupt stay-at-home orders in response to COVID-19 curtailed business activity, which dampened consumer spending. The federal government responded, arranging stimulus payments for millions of Americans.

Wall Street bounced back from its March downturn, but the economy limped along. The pandemic entered its worst phase in fall, but two highly promising vaccines were announced in November, and as winter started, they began to roll out to the public. On the cusp of 2021, Congress approved a second national economic stimulus, and the European Union and United Kingdom signed off on a post-Brexit trade deal.

There are many unanswered questions as we enter 2021. Will mass vaccination happen as quickly as they anticipate? Will a vaccination program lead to more hiring, more travel, more in-store shopping, and more confidence? The financial markets will be watching progress on this effort.

The U.S. Economy
The pandemic sent the U.S. economy into an abnormal phase, and so our fundamental economic indicators displayed atypical readings.

The Department of Labor's main jobless rate, 3.5% in February, hit 14.7% by April. Headline unemployment declined for the next seven months, to 6.7% by November. The U-6 unemployment rate, measuring unemployment and underemployment, peaked at 22.8% in April.[4][5]

The Federal Reserve took the benchmark federal funds interest rate down to a target range of 0-0.25%, and revived emergency loan programs first introduced in 2008. It collaborated with the Department of the Treasury on efforts to buy corporate bonds and encourage business loans. In a monetary policy shift, the central bank said in August that it would accept average inflation of 2% for the near term, and was willing to tolerate a little more inflation in the economy while pursuing the goal of full employment.[9][10]

As stay-at-home orders lifted, the economy rebounded. Gross domestic product, which the Bureau of Economic Analysis said had contracted 31.4% in the second quarter, grew 33.4% in Q3. The BEA also recorded a 41.0% Q3 climb for consumer spending. Stay-at-home orders returned in Q4, however, prompting another federal economic stimulus in December.[11]

The housing market stayed strong. By November, existing home sales were up 25.8% year-over-year, according to the National Association of Realtors; Census Bureau data showed a 20.8% annualized improvement for new home buying.[12][13]

The U.S.-China tariff dispute eased throughout the year. In the January 2020 trade talks, the U.S. promised to lessen import taxes on Chinese goods, and China agreed to buy more American exports.[14]

The European Union and United Kingdom agreed to a post-Brexit trade deal on December 24. This completed the Brexit process, which began with the 2016 leave vote and included the U.K.'s formal exit from the E.U. last January. Businesses and financial firms based in the U.K. now face new trade rules and costs, even with the new pact in place.[17]

Final Thoughts
We join all Americans in happily drawing the curtain on 2020. Though it was a challenging and tragic year for so many, there are good reasons to believe that 2021 will be a year of progress in returning to our pre-pandemic normal. We wish you and your family a healthy and happy new year!

Source: Econoday, December 31, 2020
The Econoday economic calendar lists upcoming U.S. economic data releases (including key economic indicators), Federal Reserve policy meetings, and speaking engagements of Federal Reserve officials. The content is developed from sources believed to be providing accurate information. The forecasts or forward-looking statements are based on assumptions and may not materialize. The forecasts also are subject to revision.

Source: Zacks, December 31, 2020
Companies mentioned are for informational purposes only. It should not be considered a solicitation for the purchase or sale of the securities. Investing involves risks, and investment decisions should be based on your own goals, time horizon, and tolerance for risk. The return and principal value of investments will fluctuate as market conditions change. When sold, investments may be worth more or less than their original cost. Companies may reschedule when they report earnings without notice. 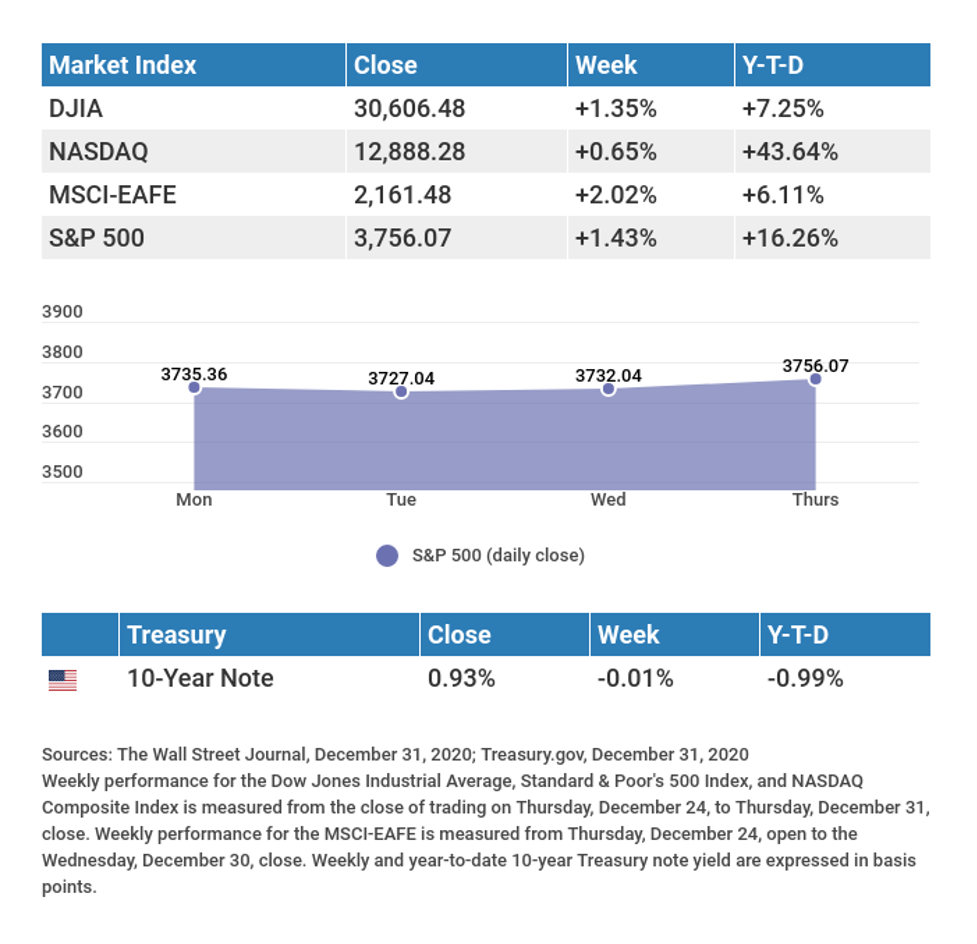 Investing involves risk including the potential loss of principal. No investment strategy can guarantee a profit or protect against loss in periods of declining values.

Diversification does not guarantee profit nor is it guaranteed to protect assets.

International investing involves special risks such as currency fluctuation and political instability and may not be suitable for all investors.

The Standard & Poor's 500 (S&P 500) is an unmanaged group of securities considered to be representative of the stock market in general.

The Dow Jones Industrial Average is a price-weighted average of 30 significant stocks traded on the New York Stock Exchange and the Nasdaq. The DJIA was invented by Charles Dow back in 1896.

The Nasdaq Composite is an index of the common stocks and similar securities listed on the Nasdaq stock market and is considered a broad indicator of the performance of stocks of technology companies and growth companies.

The MSCI EAFE Index was created by Morgan Stanley Capital International (MSCI) that serves as a benchmark of the performance in major international equity markets as represented by 21 major MSCI indices from Europe, Australia, and Southeast Asia.

Opinions expressed are subject to change without notice and are not intended as investment advice or to predict future performance.

Past performance does not guarantee future results.

You cannot invest directly in an index.

Consult your financial professional before making any investment decision.

These are the views of Platinum Advisor Strategies, LLC, and not necessarily those of the named representative, Broker dealer or Investment Advisor and should not be construed as investment advice. Neither the named representative nor the named Broker dealer or Investment Advisor gives tax or legal advice. All information is believed to be from reliable sources; however, we make no representation as to its completeness or accuracy. Please consult your financial professional for further information.

The market indexes discussed are unmanaged and generally considered representative of their respective markets. Individuals cannot directly invest in unmanaged indexes. Past performance does not guarantee future results. The return and principal value of investments will fluctuate as market conditions change. When sold, investments may be worth more or less than their original cost.